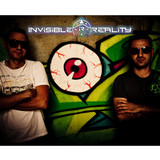 Invisible Reality was conceived in 2002 at Israel , when Shamil Abramov and Igor Sorin began to cooperate. .They met in Israel after their parents emigrated . Igor and Shamil started to experiment their skills together , and the results not late to come. The music was with unique sound and direction. Many releases on leading Psytrance labels,their music was one of most wanted material for label releases ... Huge support from biggest artists and DJs over the globe.Their music was played almost each party or festival . In 2007 they signed with the

German label IONO music, The debut album "Visibility" in 2009 showed progressive music fans a new point of view. In 2011 they released their second album "Parallel fantasy", which gave fans new and one of a kind sound of Invisible Reality. Their third album "Underworld" released in February 2015 with crisp sound. 2018-2019 Came to the world their 4th album "Re.Gen" with fresh ideas that keep the PsyProg spirit for our days ... They performed almost on all big Festival in the world