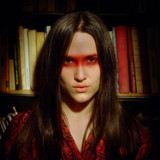 Mimi Koros, or otherwise known as Saya Noé is a Hungarian singer-songwriter. She spent most of her childhood growing up in Kuala Lumpur, Malaysia with her musician parents. Her love for music began at a young age when she learned the violin and the flute. A few years later she picked up the guitar and started writing her own songs as well. After spending a year abroad in Barcelona working as an early childhood educator, she finally decided to dedicate herself to music completely. She moved back to Budapest and began studying music production at the Budapest School of Music Technology and incorporating her new knowledge into her songwriting. Her first EP, "Taboo" was released in May 2019. It's songs can be described as moody and melancholic, electro pop, with hints of hip hop and trap elements. Saya Noé's first music video was also released shortly after, to the song "Free", which premiered on M2 Petőfi TV.

Her biggest accomplishment so far has been that she was selected by Grammy-winning producer and mixer, Matter Lawrence (UK) to co-work on one of her upcoming songs during the HOTS SongLab session in the Autumn of 2019.