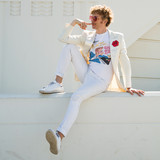 LUXXURY (Kitsuné, Future Disco, Eskimo) makes dusty disco and bedroom pop infused funk: dance music for adults. Raw, funky bass-lines plucked with grown-man finesse. A mastery of keyboard and synth native only to those who lived through the late '70s/early '80s. Dust in the glitter that vibrates in the space between string stabs, bongo slaps, and guitar jabs—even while the steady pulse and astral effects feel beamed in from a more cybernetic future Los Angeles. That's where the nu-disco wizard born Blake Robin dwells, of course. That is, when he isn't on the road opening for Giorgio Moroder or the Juan MacLean; leading his dapper band on late-night TV; remixing live at DJ sets in Mexico City, New York and Berlin; or seeding his Dublab radio show/Spotify playlist Good Morning, Disco! with gems that span four decades of groove-first music. In fact, you might've first felt his deft touch via the controversial Luxxury Edits—where he uses the multi-tracks (stems) of classic hits to create dubby slow-disco versions—but his original music is no less arresting. After two LPs of way-finding, Luxxury has come into his own with a sound that reflects not only a newfound earnestness of expression but a lifelong love for the craft of disco. Goes well with: Breakbot, Tame Impala, Roosevelt, Parcels, Poolside, Goldroom, Toro y Moi and The Bee Gees.