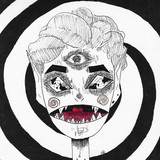 noubodii is an anonymous bedroom producer and songwriter who makes sensual music at the crossing point of genres. his debut mixtape You're Dead. What Now? is the quintessence of melancholic beats and piercing lyrics about love and death that are interwoven into a viscous vibe. independent artists from Malaysia, Canada, Kazakhstan, the USA and Russia participated in the recording. in June 2020 noubodii has released new single Pluie recorded with up-and-coming artist from Switzerland MaKhey. Later in October he has started experimenting with Lofi Hip Hop. As part of his endless sessions he has released two instrumental singles: False Memories and one more time, please? These tracks wasn't "classical" Lofi in the ordinary sense of the word, because they also contain some elements of retro and future electronic music, such as retro mono lead and fat 808's. As a matter of fact False Memories has been featured on one of biggest Lofi Hip-Hop mixes on YouTube just as on a lot of playlists on Spotify and has reached big amount of streams. noubodii has started 2021 on a high note and released his new single whatever it takes. This song was really experimental for his tried-and-true Hip-Hop based style. This time it was future bass, but with some sort of sense of nostalgic and retro vibes. whatever it takes dedicated to his friend Arthur who was supporting him since day one in the music industry. Also he is captured on the single's cover. in 2021 noubodii is going to release more.