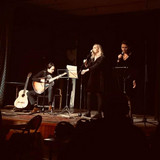 ro.t (short for Rebecka O'Nils Trio) is a Swedish folk trio who perform their own melodies to Swedish poetry from the 17th century and onwards. They are inspired by a wide range of musical genres, including hymns, medieval and renaissance music as well as Scandinavian folk music. Their musical arrangements focus on advanced and unique harmonies. Their first album, Drömmarnas garn: dikter av Harriet Löwenhjelm, was released in September 2020 and consists of original compositions for poems by the Swedish poet and artist Harriet Löwenhjelm (1887-1918). Löwenhjelm was also a painter, and the album cover, as well as the covers of the singles from the album, are all paintings by her. During the fall of 2021 they plan on releasing a new single. This time with lyrics by Ulrika Carolina Widström (1764-1841), a contemporary of the Swedish national poet Carl Michael Bellman (1740-1795).