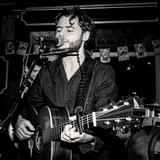 Robb Murphy is an Irish singer-songwriter whose journey has taken him far and wide to hone his craft as a master storyteller.

Robb’s solo career began with the recording of his internationally acclaimed debut album Take A Stand, officially released in April 2012. His 2nd studio album, Sleep Tonight launched in March of 2015 and has kept him busy with Radio, TV and live performances. Recent successes include a variety of sessions, festivals and competitions; 6 successful tours of The Netherlands, a tour of Germany, a feature on BBC Two, The Arts Show, feature on BBC’s ‘Love In A Day’ documentary, ‘Track of the Day’ – Hot Press, appearances at the Belfast-Nashville Songwriters Festival and headlining Copenhagen Songwriters Festival to name but a few. “Robb Murphy is a real talent.