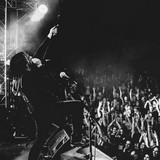 Norma Jean is an American progressive heavy rock band, originally from Atlanta, Georgia and currently based in Fort Smith, Arkansas. After nearly 20 years, the band identifies more as an artistic collective than a traditional band. To date, Norma Jean has released seven studio albums and received a Grammy Award nomination in 2006. Their most ambitious album to date, Polar Similar was released in 2016. The first single, 1,00,000 Watts was premiered by NPR in a Viking’s Choice review, which said of the track, “1,000,000 Watts grooves and lashes out wildly like a caged animal, but more than ever Norma Jean colorsthe chaos with brooding hues. Stomping riffs alternate with angular and delayed guitar melodies in a grey haze as Cory Brandan builds his moody croons into raging screams,” and compares the release to Nine Inch Nails. Polar Similar was recorded at Pachyderm Studio, the legendary birthplace of Nirvana’s In Utero and Failure’s Comfort, lending to the elevated sound and tone of the album.<br>