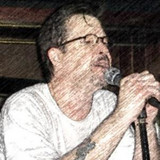 “This may be Big Bus Dream’s best work by a mile” – Jamsphere Magazine Big Bus Dream's 2021 release, Giant in My Mind, is a year and a half project of writing and recording - a journey of self-reflection about what it takes to overcome a lifetime of hurdles and continue to make music.

“A magical, musical journey” – Pitchfork Music For those not in the know, Mike Shannon is not only the founder of 4th Ward (2000) and Big Bus Dream (2006), but a product of CBGB's post-punk scene. Indeed, 4th Ward's self-titled release debuted at #20 on CMJ's Top 200 National Charts whilst Big Bus Dream's debut album (2006), and The Jesters of Xmas Town (2008) both topped several European music charts, and were even featured in MTV's Pimp My Ride. Mike Shannon's debut solo effort, My Dream My Fantasy, encompassed his 18 years as founder and primary writer with 4th Ward and Big Bus Dream, it blends both his acoustic roots, as well as a more powerful electric arrangement. "ONE OF MY TOP 3 ALBUMS OF 2017", wrote Russell A. Trunk, Exclusive Magazine http://www.bigbusdream.com