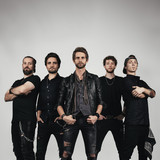 After publishing a debut album (My Darkest Hour, 2011) rated best by famous music magazines like RockHard and winning the award Deutscher Rock & Pop-Preis, in 2016 BROACH further on successfully released their album Fall To Rise. Although the ambience wasn’t as gloomy as in the first record dealing with death and break-ups, from a musical point of view the band remained true to itself. Basically, with its heavy guitar riffs and catchy vocal lines the second album sounds slightly more rounded. In addition to Fall to Rise the first two music videos were released: the title song already reached over 110.000 clicks by itself.   As can be seen at their live shows, the chemistry between the five guys from Southern Bavaria is right: besides delivering professional live-music they’re full of passion and emotion. Appealing songs to sing along, tight & heavy drums, a driving bass and catchy guitar riffs in combination with the unmistakable voice of lead singer Andreas Kofler make the sound of BROACH truly unique. Songs like Fall to Rise or So Close know how to thrill their audience and put it in high spirits. However, tracks like Broken invite to sing along and make the overall picture perfect. The range is considerable and therefore the music addresses different target groups.