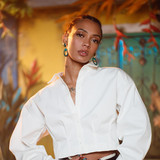 Her vocal style and distinctive sound are unique, and she dominates in her home country as the leading female singer in her genre of pop/R&B. At the age of 19, she won the 2011 X-Factor competition, and her subsequent single, a cover of Jordin Sparks’ “No Air”, peaked at number 1 in the Dutch Top 100 charts. Shortly after, together with international producer formation “Yellow Claw” they released “Shotgun” through Spinnin’ Records. To this day, it’s still one of the biggest international hits breaking records around the world. The video has more than 120 million views on Youtube, more than 30 million plays on Spotify. In February 2016 Rochelle released her first solo single after a string of featured singles. Her solo release “All Night Long” showed her own individual sound and capabilities as a lead vocalist and the track was regarded an instant hit by the biggest commercial radio stations in The Netherlands. The track shot into the Dutch Top 40 and stayed there for 23 weeks. Shortly after, she received her first independent GOLD award for “All Night Long”. With more than 12 million plays on Spotify and more