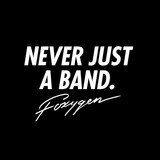 Foxygen is the classic rock-leaning experimental pop project of multi-instrumentalists Sam France and Jonathan Rado, whose swaggering approach to performance often evokes acts like Jagger, Bowie, and Reed as much as do their songs. After Foxygen debuted in 2012 with the vivacious Take the Kids Off Broadway, 2013's We Are the 21st Century Ambassadors of Peace & Magic marked their arrival on the Billboard 200 while receiving raves from the indie music press. Not ones to stagnate, they loosened their structure on the sprawling ...And Star Power (2014) and employed a 40-plus-piece orchestra on the theatrical, more refined Hang (2016). France and Rado grew up in the Los Angeles suburb of Westlake Village and started the band in 2005 as 15-year-old high school freshmen. Apart from sharing a voracious love of classic albums from the Ramones to Led Zeppelin, the two bonded over a shared inspiration after watching the rockumentary Dig together. Learning that Anton Newcombe -- the mastermind behind the Brian Jonestown Massacre and key subject of the film -- played up to 75 different instruments on his band's albums inspired the youths to learn as many different instruments as possible themselves. The pair worked on about ten home-recorded, self-distributed albums in their high school days, eventually parting ways when it was time to go off to college. France went west to Olympia while Rado went to New York, and they both played in other bands, feeling mostly unsatisfied with their new projects. France made a brief trek out to the East Coast in 2011 and Foxygen constructed the schizophrenic and Stones-steeped Take the Kids Off Broadway. The album saw release in the summer of 2012 on mega indie label Jagjaguwar. A more realized full-length followed in early 2013 in the form of the Richard Swift-produced We Are the 21st Century Ambassadors of Peace & Magic. It reached number 76 on the Billboard 200, and the band soon found themselves touring nonstop internationally, with France developing a reputation for antagonistic and sometimes violent stage antics. Foxygen followed up their critically lauded first two albums in late 2014 with the densely stuffed double album ...And Star Power, returning in 2016 with Hang. With additional contributions from the Lemon Twigs and the Flaming Lips' Steve Drozd, the latter had them accompanied by a symphony orchestra. Returning to the classic rock forms and stylings of Foxygen's earlier work, fifth album Seeing Other People came with the announcement of an indefinite hiatus from touring. ~ Fred Thomas, Rovi