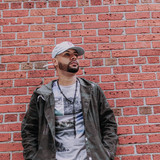 Melvin Alex is a Producer/Dj based in New York that creates mellow sample based music with hints of Rhodes, Guitars, and Synthesizer over his productions. Most influenced by jazz music, the prolific beat maker who blends jazz and Hip-Hop with that analog feel really well has released everything from albums to singles on his own label including various Lp’s & beat-tapes, which three of them are his most known “Tea Party” and “Raíces” LP’s released mid 2018 and late 2019,

and “Aurora” EP released early 2020 which the song “Astral” got placed in the editorial BEATStrumental Playlist on Apple Music gaining over 200k plays is the first month, these three projects gained major recognition worldwide. Some of his most recognized songs are “Blame Me”, “Autumn 98”, “Barrio”, “Astral”, “Think Twice feat.Newtro”, “Sweet & Sour feat.Roque” & more Recently Is working on his 3rd LP called “Infinito” and 2nd EP called “Lunar” which are gonna be release soon. Booking/Enquiries: Duomenzionalrecords@gmail.com