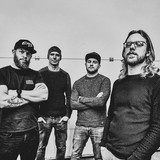 Dutch hardcoreband ‘Manu Armata’ profiles themselves as ‘From the heart in your face, since 2007’, which is a pretty accurate way to describe the band. After more than 13 years and several releases under their belt, the band of friends (pretty much some of the guys have been playing together since the early nineties next to the fact the drummer and singer are brothers), is certainly no stranger in the hardcore community. A steady output of EPs on labels as 5FeetUnderRecords, White Russian Records and Beatdown Hardwear, the release of the new album ‘Invictus’ through Useless Pride Records, tours all over Europe and shows with the leading bands in the genre - Manu Armata does exactly what they claim to do. Play from the heart, straight in your face. The new record ‘Invictus’ contains 12 hardcore tracks that are a perfect follow up to 2016’s ‘All I Have’ - which was

received with great enthusiasm and raving reviews. This brutal piece of hardcore music will definitely not disappoint fans of bands like Terror, Strife, Lionheart and Sick Of It All. Although Manu Armata has been around for quite some time, they show no signs of slowing down. Instead they seem more eager than before.