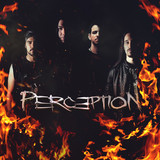 Perc3ption is a Sao Paulo-based creative band that plays an exciting and heavy music they call "cinematic metal." Across their widely acclaimed debut album, Reason And Faith, Perc3ption became well known throughout their country and outside of it, but it was in 2016 with album Once And For All that the band established itself as one of the important metal bands in Brazil. As part of the promotion for both albums, they have performed with great metal bands like Evergrey, Amorphis, Pain of Salvation, Sonata Arctica, Grave Digger, Angra and Sepultura. Perc3ption are currently in the process of recording their third album.