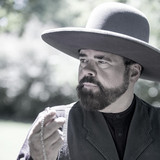 While the name Andrew Farriss resonates in industry circles alongside his band INXS and the many hits he penned while they topped the charts, he is rightfully considered one of the country’s most prolific songwriters, having written, produced and performed music for acts such as Yothu Yindi, Tom Jones, Tania Kernaghan and Jenny Morris. In recent years, he has been co-writing with some of the biggest names in Nashville, including the likes of Grammy-award winning songwriters Gordon Kennedy and Paul Overstreet, as well as veritable country music songsmiths Frank J Myers, James Dean Hicks and Bruce Wallace. Finding himself in the country music industry itself is fitting; Andrew has spent the past two-and-a-half decades living on the land, on a functioning cattle and grain farm in North-West New South Wales. There is something about the storytelling style in this musical genre that suits his sensibilities and that much is evident in the way his debut release, Come Midnight, resonated with audiences. For Andrew, many of the tracks from his forthcoming album draw on the songwriter’s own life experiences – directly or indirectly – some are from the archives and have been revisited, while others have been written recently specifically for this release. He is looking forward to being part of Australia’s biggest country music festival to showcases his new material and acknowledges the great support he has received from music fans and critics alike.