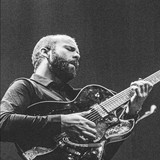 Peer Nic (31) is a singer songwriter from the town of Sortland, Norway. Peer became obsessed with songwriting at an early age, inspired by English and American folk rock. The single Forever Lost featuring Signe Marie Rustad and The Macedonian Radio Symphony Orchestra, is dedicated to Peers Father who passed away during the recording. The album is produced by Rune Berg from The Margarets and released on Lydbroderiet Plateselskap. To order CD or LP or whatever, feel free to write to peernicmusic@gmail.com