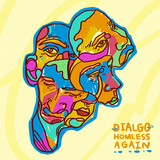 Dialgo is a four-piece instrumental band located in Tel-aviv, Israel. The band is known for their unique sound that offers a blend of Afrobeat, Acid jazz and Post rock. Dialgo’s 1st LP ‘Stranger Things’ was released in November 2017. The LP got the band recognition along Israel’s indie crowd. The band played major indie festivals in Israel, along major indie bands. Between the years 2018-2019, the band kept writing new music while they are touring all along Israel, seeking for inspiration from the variety of landscapes that Israel has to offer. In October 2019, the band released their first single from their album called ‘Terres’. In October 2020, the band released their second single from their album called ‘Kaldi’s Magical Berries’. Dialgo’s 2nd LP ‘Homeless Again’ will be released July 20th, 2021. Meanwhile in 2020, the band collaborate with the company and music label ‘Artlist’. Dialgo has made an afrobeat focused EP called ‘Lagos’ for Artlist’s catalog. The EP has gained Dialgo fans overseas.