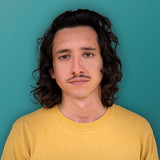 “Do. Or do not. There is no try.” – YodaOn a troubled world called earth, from a little town called Paris, there was a human witnessing the paradoxes of mankind. One day he found his purpose producing inspiring songs for people searching for inspiration. That is how Manwarp started. This producer launched his new journey in 2019, after fifteen years of making music, determined to reach people across the globe. Somewhere between the nostalgia of the disco era, the energy of rap instrumentals and the onset of house and techno, Manwarp successfully manages to combine his influences and evolve track by track. Self-producing through his own label, Tapage Records, Manwarp ensures total control over his work and the definition of his sound: expressive music with strong drums, ethereal synths and penetrating melodies. In March 2021 comes out “Inner Fight”. This powerful and melancholic theme completes the universe of Manwarp and takes its sound identity to a new level, more accomplished than ever.