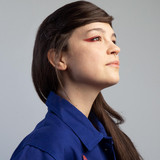 Months after Rykka’s performance in Stockholm for Eurovision

2016, Rykka was shortlisted to become an artist representative to complete 4 years of training to prepare for a journey to Mars. Olympus Mons, a revolutionary space agency focused on developing future civilisations made the call for artists back in 2016. Along with this news, comes new music - Dreams/Death is Rykka’s musical reintroduction to the world, and calls out to those who have ideas that scare them. “Will my dreams be the death of me?” Sound familiar? Anyone who has plunged into uncharted waters knows the feeling. To fall completely, to be taken over by an endeavour with your whole being, knowing that you will never be the same. Knowing that you will almost inevitably have to face your greatest personal fears. The vocal recording and production was a collaboration between Rykka and Australian/Swiss producer Jessiquoi, and was produced by Pablo Nouvelle who can be found somewhere in the Swiss mountains. The song was mixed by Jeff Dawson and mastered by Elisa Pangseang in Vancouver, Canada, on unceded traditional territories of the Coast Salish peoples of the Səl̓ílwətaɬ (Tsleil-Waututh) Nations. Dreams//Death is a prequel to Rykka’s next single, “Louder,” coming in summer 2021. Also included in the release is a remix by Daggerss, an upcoming musician and producer living in a small city in Manitoba, Canada. She serves up a whimsical version of Dreams//Death to the likes of soft hues of pinks and blues.