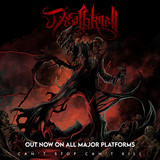 DEATHKNELL is a Melodic Death Metal Band formed in 2009, in India. With over a decade in the Indian metal scene, the band members are committed to creating roaring death metal with highly melodic guitar riffs and heavy drum rolls In 2012, the band dropped their first album, “Still to Decide.” The album comprises different tracks from various genres, including four melodic death metal tracks and two rock tracks. Since it is neither exactly a metal nor a rock album, it’s titled “Still to Decide.”

It is based on death and destruction, a concept related to life after death. So, it’s a little difficult to put it in a specific genre. The Band has been featured on various national and international radio stations and TV broadcast platforms, like MTV, Doordarshan, etc.