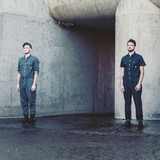 Songwriters Drake Margolnick and Michael Finster were both hard at work on their own solo careers when they decided to join forces and form Flagship in 2011. Both regulars in the Charlotte, North Carolina music scene, Finster left his group Campbell and took on the role of drummer while Margolnick reconfigured his solo act into material for the newly formed duo. Taking cues from the intensity of early U2 as well as elements of Americana and radio-friendly rock acts, Flagship quickly developed a churning and dreamy sound and was signed to California indie imprint Bright Antenna Records. Debut EP Blackbush was issued in 2012 and was followed the next year by a self-titled full-length. The band toured and recorded frequently, issuing a second EP in 2015's Faded and second album The Electric Man in early 2017. ~ Fred Thomas, Rovi