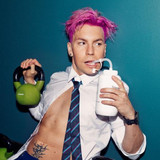 Vocalist Antti Tuisku rose to fame in his native Finland as a popular contestant on the 2003 season of Idols, the country's equivalent to England's Pop Idol and the United States' American Idol. Although he placed third, he had no trouble finding commercial success after leaving the show, mixing up lighthearted dance-pop and passionate ballads. He released five albums in three years: Ensimmäinen in 2004, Antti Tuisku and the Christmas release Minun Jouluni in 2005, and both New York and Rovaniemi (issued on the same day) in 2006. Three of the albums topped Finland's album chart. ~ Andy Kellman, Rovi