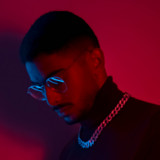 AbdelRhman Fathei Haffour, better known by his stage name “Frxtz”, is a 21 year-old Egyptian rapper living in Abu Dhabi. Currently, he is studying Mass Media Communication in The British University of Egypt. It all started when he was in the American University of Sharjah and became roommates with GiovanZay who taught him everything from production to recording. Frxtz is a signed artist with Record label “Cixot” which was also founded by “GiovanZay”. His music style varies from English to Arabic, but mainly raps in English.