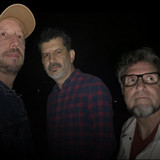 Down West makes the kind of indie music that could only be grown in Southern California — folk, pop and rock songs with a psychedelic vibe and Latin flavor. With the line-up of songwriter Steve Stanard on guitar and harmonica, Theo Waddell on cajon and percussion, and Michael Marquez on bass, you might think this would be an simple coffeehouse-style listening experience. But pop-oriented, noisy and often political songwriting, along with an aggressive rhythm driving everything, makes Down West something else entirely.   After their EP, and a long series of single releases, Down West has written and recorded their first full-length album, The Land of California, due for release in September 2020.