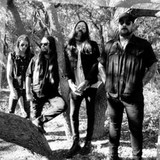 Featuring He Is Legend

North Carolina rock act He Is Legend are renowned for being much of what inspires them, a cult classic. The band formed in 2000, as its members were graduating from high school in Wilmington, North Carolina. Singer Schuylar Croom, lead guitarist Adam Tanbouz, rhythm guitarist McKenzie Bell, bassist Matt Williams, and drummer Steven Bache cycled through a variety of band names and musical approaches before establishing themselves as He Is Legend. After a self-released demo, A Kiss That Killed the One We Love (No One Wins), the band signed with the small indie label Tribunal Records to release their first EP, 91025, in the summer of 2004. Shortly after, He Is Legend signed with the more established Solid State Records to release their critically acclaimed full-length debut, I Am Hollywood, later the same year. After a two-year break, He Is Legend returned with their second full-length, Suck Out the Poison, in the fall of 2006. In May 2009 the band issued the single "The Primarily Blues," in anticipation of the release of their third studio long-player It Hates You. By the end of that summer, the band had gone on an indefinite hiatus. In February 2014, they dropped "Something Witchy," the first single from their next full-length, Heavy Fruit, which arrived later that August via Tragic Hero. Few, the band's entirely crowd-funded fifth long-player, followed in April 2017 after the band signed with Spinefarm Records. Their forthcoming LP White Bat is expected in 2019.