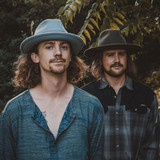 Duncan Ivany & The North Coast Band formed in November 2018 with a mission to bring soulful music to Canadians and music lovers all over the world. While living and recording in a cabin in the hills of Erin, Ontario the Ivany Brothers have been making Indie-folk-rock music. They are letting their true musical personalities shine and it is showing in their new music. The music is inspired by the likes of: Bahamas, Bruce Springsteen and Zac Brown Band Duncan Ivany - Rhythm Guitar and Vocals

Connor Ivany - Lead Guitar and Percussion These gents played closed to 75 shows in 2019 ending the year with an independent Cross-Canada tour. The band has created three EP's and a single in this time. Many more experimental indie-folk songs are on the way in 2020. Always creating and sharing music. One song per week is being released starting May 1st 2020 for 17 weeks straight ✌