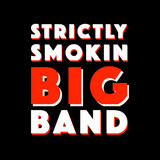 This 19-strong big band prides itself on the versatility of its performance: originally rooted in swing, but beyond comfortable performing new, original and contemporary material. It is the only ensemble of it’s kind in the North of England and was recently hailed as having potential to be the best big band in the UK. Harlem '58 is the first of three albums being recorded in 2021. SSBB travels the country and draws large audiences at established clubs, festivals and music venues to great acclaim with vocalist Alice Grace. As well as drawing huge, often sell out crowds, in their own right – Stricty Smokin’ have performed with jazz A listers including Claire Martin, Mark Nightingale, Mike Lovatt, Anthony Strong, Joe Stilgoe, Alan Barnes, Paul Booth, and more. The band’s niche is in the performance of engaging programs drawing influence from a huge range of composers, arrangers and musicians from across the world alongside Michael Lamb's own arrangements. The scope of style and technique is huge and Strictly Smokin’ work tirelessly to achieve the highest possible standards and the most engaging performances and recordings.