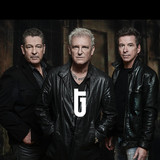 Glass Tiger has shared stages and recorded performances with some of the world’s leading acts including: Rod Stewart, Tina Turner, Bryan Adams, Journey, Julian Lennon, and Cheap Trick to name a few. In celebration of 31 years of making music together, Glass Tiger released 31 in 2018. Produced by Johnny Reid, the album features the reimagining of the classic songs they are best known for. While 31 was well received by critics and fans alike, the demand for a new studio recording of unreleased material remained at the front and foremost of their mind. This led Glass Tiger to release their fifth studio album 33 in 2019. The celebration of life and music continues with Glass Tiger’s latest offering… Created during the summer of 2020, with the world continuing its fight to recover from the massive impact of a global pandemic, “Songs For A Winter’s Night” is primarily a collection of original Christmas/Holiday songs written by Glass Tiger and joined by artists, Roch Voisine, Natalie MacMaster, Isabel Bayrakdarian, Steve Sidwell Orchestra and of course the legendary Gordon Lightfoot. “We’ve waited 34 years to create an original release for Christmas, and this Christmas is one that most people will never forget.” – Glass Tiger