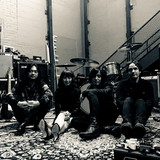 The Tokyo, Japan based 4-piece Instrumental Rock band MONO was originally formed in 1999. Their unique approach of combining moving orchestral arrangements and shoegaze guitar noise is held in extremely high regard; so much so, that the band’s musicianship and the diverse musical palette has eclipsed the Rock genre and exists within its own realm. As British Musical Magazine NME once stated, "this is music for the Gods". A particularly monumental live memory of the band was a special set of shows with an orchestra in New York, Tokyo, London and Melbourne for the 10th anniversary and in New York, Chicago, Los Angeles and London for the 20th anniversary. Their annual world tour consists of around 150 shows. The band has now visited over 57 countries (and counting) and proudly holds the title of being one of the most internationally successful bands in Japan. Both critics and fans of Rock music agree that MONO are one of the best live bands in existence. After successfully completing the 20th anniversary world tour in 2020, MONO now enters into the third decade. As the first creation of this decade, the new 11th album “Pilgrimage of the Soul” is scheduled for September 2021 release, which was recorded and mixed — cautiously, anxiously, yet optimistically — during the height of the COVID-19 pandemic in the summer of 2020 with one of the band’s longtime partners, Steve Albini.