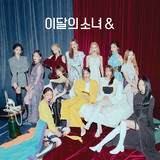 K-pop girl group Loona boasts a dozen members whose individual styles combine to create energetic pop that is influenced by throwback hip-hop, '90s R&B, and electronic dance music. Debuting in 2016, they went on to form sub-units such as Loona 1/3, Loona Odd Eye Circle, and Loona yyxy, delivering EPs that proved popular in their native Korea and in the U.S. They made their major international breakthrough with 2018's [+ +], faring even better with the 2020 follow-ups [#] and [12:00], which was a hit in South Korea, the U.S., Australia, and Europe. Formed in Seoul by the Blockberry Creative label, Loona began the slow unveiling of each member starting in spring 2016. Employing a "Girl of the Month" theme, each member was showcased with a solo single that revealed her personality and musical profile. The first wave began in October 2016, debuting HeeJin, HyunJin, HaSeul, YeoJin, and Hong Kong native Vivi (the sole non-Korean member). All but youngest member YeoJin would join to form Loona's first sub-unit, Loona 1/3. The foursome issued their first EP, the Korean Top Ten debut Love & Live, in March 2017, with a repackaged version, Love & Evil, landing a month later. The second wave of singles kicked off soon after with previously announced member Vivi, as well as Kim Lip, JinSoul, and Choerry, who formed the sub-unit trio Loona Odd Eye Circle. Their EP, Mix & Match, was released that September, with the Max & Match repackage pushed out the next month. While these short-plays marked a slight slide down the Korean charts, they also started Loona's ascent on the U.S. charts. The third and final wave -- which resulted in sub-unit Loona yyxy -- extended from late 2017 into 2018. In addition to Yves and Go Won, Loona yyxy also included Chuu and Olivia Hye, whose high-energy beats and cool synth styles helped push their individual singles to the highest chart placements of any Loona member. The sub-unit's EP fared just as well, as Beauty & the Beat -- which featured an appearance by Grimes on "love4eva" -- peaked at number four in Korea and number six on the U.S. World Albums chart upon release that May. Almost two years after the group's emergence, the 12-piece finally convened to issue their official debut EP, [+ +], in August 2018. Featuring the single "Favorite," [+ +] rose to number two in Korea and peaked at number four on the U.S. World Albums and Heatseekers charts. A repackaged version, [X X], landed in 2019, doubling the tracks with previously unreleased cuts like "Butterfly." The following year, Loona maintained their international chart presence with [#] and [12:00]. The latter marked the group's first number one on the Billboard Heatseekers chart. ~ Neil Z. Yeung, Rovi