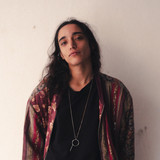 Sama Abdulhadi’s rise to becoming one of the first DJs to emerge internationally from Palestine can be traced back to Beirut, where she immersed herself in the burgeoning local techno scene. Her sets, while rooted in high-octane, punchy techno, have a distinguished and defined ark, encompassing a broad range of sounds in their beginning and end. It wasn’t until much later that DJing became her focus, sparked by a run of gigs that has continued ever since. Her education in music continues to inform her work: not only has it had a big impact on how she hears sound, but she sprinkles real-life samples throughout her sets, recorded on her travels and shaped back in her studio.

In 2018, she performed at Germany’s Fusion Festival and Hungary’s Sziget Festival, but it was her Boiler Room set, viewed nearly 3-million times, that identified her talents to the wider electronic music community. While touring every weekend, she bases herself in Paris, France, after completing a six-month residency at the International City of Arts having been selected as a Laureate by the French Institute. In July, she completed her first Essential Mix for BBC Radio 1. Much beyond the success she’s already enjoying, Sama’s goal has always been to put Palestine on the musical map. While she continues to excel on all fronts, she uses her status as a rising touring DJ to support the growing number of musicians at home.