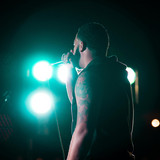 Bigg Z, or "Z" for short, is a multi-faceted emcee from Stockton, CA. Known for his intricate lyrics and compelling metaphors, Z has become a quiet storm in the Hip-Hop community. Z's journey to becoming a wordsmith did not follow its usual path. Before his current residence in Los Angeles, he started traveling the world at a young age. This gave him a broader prospective not only about his life, but more importantly, his music. Z was exposed to a mixture of artists, culture, and language, opening his mind and expanding his musical pallet.    A well-rounded lover of all things lyrical, Z's wide range of influences span from R&B to Jazz and even Pop to all variations of Rap and Hip-Hop.

Z's intelligent, yet playful approach to Hip-Hop simultaneously entertains and educates listeners.    Though he would be considered a latecomer in the game, Z's earned his stripes on stages throughout California. After the release of Progressive, he was interviewed and featured on Dash Radio's Native Rhymes station. Currently he is promoting his Single, Piggy Bank, and is set to be following up with a unique visual from the recent single.   To his growing fan base, Z offers predictions for what's to come, "I'm going harder than before, roll with me through these next stages."