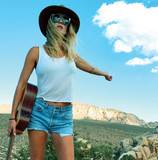 As the baby of 3 in a house of British-Trinidadian-Canadians, Clair was raised on Macrobiotic Food, Transcendental Meditation, Gregorian Chants and Energization Exercises. She spent her high school years playing basketball and snowboarding, before trading her Burton for a Gibson for New York City. Clair took a bite of the Apple— from gigging for NYC’s social elite, bottle service waitressing in bad and bougie nightclubs, performing on Live with Kelli and Michael for CeeLo Green, and playing with both a psychedelic/jazz/improv trio and a kids hip hop group— she conquered the rat race just in time to hear the West Coast calling. It was a bumpy landing in California, but the soft sand and prozac sun lead Clair to a tipi in the Laurel Canyon backyard of actor Jeremy Sisto and healer Addie Lane, where the Tipi Sessions turned into the ground zero of her next record - Vinyl- with producer Michael Woodrum.