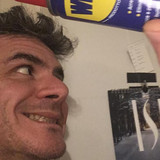 is a musician, composer, sound engineer and maker. His first sound experiences, when he’s five years old, are made with a red and black Phonola tape recorder: he records sounds of environment, unusual bawls, rattles and improvisations. The tapes have gone lost. He conducts workshops since 2003, works with schools, universities, cultural associations and libraries. Using micro-controllers and micro-processors in education and in sound research. He creates installations and interactive performances with lights, sounds and sensors, with musical instruments and DIY tools. He work with radio. He has collaborated with artists from various parts of the world. http://mainenti.net