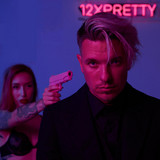 Oscillating between the West Coasts of Victoria BC and Los Angeles, indie electro innovators 12XPretty stretch the boundaries of what constitutes a signature pop sound. Spearheaded by vocalist Remy Remy and multi-instrumentalist Danny Import, the duo construct a Molotov cocktail of modern influences, projecting a kind of bubblegum cyanide into the Top 40 arena, exploding somewhere between Joji and Post Malone. It’s no wonder the band’s debut ended up in such strange musical waters. It was originally intended as a hip hop project (and hip hop versions of all the tracks still exist) but the material quickly veered into electro pop territory as Remy and Danny began to probe deeper into the cultural zeitgeist, painting a picture of a beautiful but dangerous dystopian reality. “The music is intended for the sleepwalkers yearning to wake up,” Remy remarks. “Not unlike ourselves, who are simultaneously participating in the modern climate while exposing the depravity of it all.”