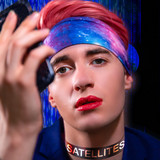 Noah is a singer, songwriter, harpist, record producer and actor based in London, UK. After touring across Europe in music/theatre productions in 2018, he has released a catalogue of LGBTQ+ electro-pop songs from 2019 and guest starred in Series 7 of webseries 'Our Town'. His tunes have been spun in clubs across the world in the USA and Brazil, and he continues to collaborate with K-pop songwriters, producers and guest star with artists such as KERRIA in her music videos. Tik Tok influencers Matthew & Ryan + Minnie & Tink have used his sounds in their Tik Tok videos, expanding Noah's presence and sounds in the Tik Tok world. Noah has dropped his next release 'Satellites' on Friday 5th March! The song blends celestial hyperpop synths, with digitalised vocals and harp to create an alienating soundscape reflecting the years of homophobic bullying he faced while growing up in the country.