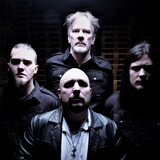 TUNGSTEN was formed in 2016 by drummer Anders Johansson (ex HAMMERFALL, ex YNGWIE J. MALMSTEEN’S RISING FORCE) after his sons Karl and Nick Johansson had let him listen to some songs they had composed together. Anders: “I really liked the songs. My sons are of course younger than me, and the songs were modern metal, like something I could never come up with. At the same time, I could hear melodies that reminded me of Nordic folk music that made me think of the past. The overall impression was catchy heavy metal with both past and future present. I asked Karl and Nick if they wanted to join me in a band and play these songs with me, and I’m happy that they accepted”. With drums (Anders), guitars (Nick) and bass (Karl), and newly composed songs, TUNGSTEN asked Mike Andersson (CLOUDSCAPE, ex PLANET ALLIANCE, FULLFORCE) to do vocals. Mike has a powerful voice and a varied style of singing and was a perfect fit to TUNGSTEN’s music.