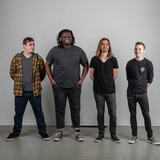 As Time Fades, a pop punk and emo-inspired band based out of Cleveland, Ohio, is the creative project of Dan (vocals/guitar), Danny (vocals/guitar), Schuyler (bass), and Toby (drums). The band are best friends looking to share their emotive lyrics and catchy instrumentation with those who are also figuring what the hell they’re doing. They've been compared to Knuckle Puck, State Champs, Chunk! No, Captain Chunk!, and Neck Deep.   During the “off-season” between their 2018 release and now, the band have matured in their approach to songwriting and illustrating a story through their lyrical content. This newfound growth will be on full display in their sophomore EP, “Trust Fall”, which released in the summer of 2021. The EP is full of soaring choruses, driving riffs, and introspective lyrics. It’s time for the band to take a trust fall into the arms of the strong scene of DIY pop punk and emo music as they continue the work to establish themselves. Trust Fall is here...will you catch us?