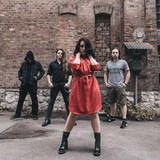 ELECTRIFYING MODERN METAL "It’s as catchy as anything could possibly get... the groove on the guitar and the pounding on that bass and kick drum definitely deliver a lot of energy and the vocals of Anna Király are relaxing and soothing but also an addictive shot of dopamine." /The Metal Observer/ MEZMERIZED was founded by Anna Király and Olivér Mudra in 2019. The two of them soon found their unique style in this popular, modern yet heavy sounding genre, so the idea of a band came to light pretty quickly and the work begun. Mezmerized entered the studio at the end of summer 2019 to record their first single “Desire”, that got released with an official video in October the same year. The next single "Satellite" followed in December with a lyric video. Mezmerized kicked off 2020 with their third single "Shutdown", accompanied with a music video, and soon released two more songs "Hybrid" and "Rage". During the summer of 2020 the band relelased the last single of their debut album, Cyanide featuring Henrik "GG6" Englund of the mighty Amaranthe. Mezmerized's first full-length album ELECTROLYZE was released on the 18th of September.