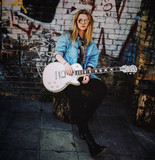 Emmi King isn’t just another average young artist—she’s a singer, songwriter, and multi-instrumentalist who plays the drums, guitar, bass, and piano. She not only composes all of her songs and lyrics on her own, but also performs all the instrumental parts on her recordings in the studio by herself. In 2015, she released her first EP gaining thousands of established fans in the USA, UK and Germany.Just several shows after her live debut, she was personally invited by multi-platinum producer Kerry Brown and Linda Perry to open for LA-based rockers Dorothy (Roc Nation) in Boston. Even though she is self-managed, she has toured with the legendary hit band Mother’s Finest and surf-rocker Donavon Frankenreiter, has appeared on German TV, and was featured in Guitar Magazine. With over 60.000 Instagram followers she has cooperated with popular brands and had her latest single “Million Dollar Movie” aired on the world famous KROQ. The 23-year-old artist aims to breathe new, refreshing, and energetic life into today‘s music scene while drawing inspiration from a wide variety of world interests and genre-bending soundscapes.