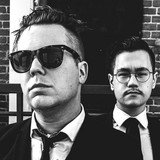 Josh Scogin kickstarted his small band with the big sound in 2013, naming the two-man outfit he modestly undersells as “a little rock, a little blues, a little hardcore” after his father’s old Camaro. And there’s a muscle car-sized rumble beneath the hood of what the Atlanta, Georgia native and his percussive partner-in-crime, Nikko Yamada, unleash with an array of guitar, bass, drums, keys, and pedals, careening between swinging barnburners, wild haymakers, and moody atmosphere. The passion, the hunger, the good humor, it all connects with diverse crowds. Deliciously stripped down and vibrant, ’68 excels in intimate environments, to be sure, but is no less unignorable on giant festival stages or on the road with Bring Me The Horizon, Stone Sour, Beartooth, Avatar, August Burns Red, The Amity Affliction, and Underoath, where they’ve earned new converts every day. In Humor and Sadness, the first album by ’68, debuted at No. 1 on the Billboard New Artist Chart. Two Parts Viper followed in 2017. Grammy-winning producer Nick Raskulinecz (Foo Fighters, Rush, Alice In Chains) became a believer after just a few songs of a ’68 set. On ‘Give One Take One’, crafted with Raskulinecz in Nashville, the band’s high intensity bombast threatens but never swallows the underlying groove. - Ryan J Downey 'Give One Take One', the new album, is out now.