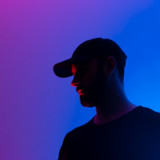 Left/Right is a shadowy figure of many hats:

composer, producer, teacher, visual artist and performer. His music has been featured in DJ Mag, Mixmag, UKF, Dancing Astronaut and garnered support from Deadmau5, Claude VonStroke, Jauz, My Nu Leng, BBC Radio 1, Rinse FM and countless more. L/R has released on Mau5trap, Confession, In/Rotation and Punks as well as his own imprint BRØKEN. He music has also been featured in ads by Nike, UFC, EA Sports, and Urban Decay. With degrees in both music composition and audio engineering, L/R loves to create both musically and visually. His tunes and dj mixes feature a spectrum of sounds that drive his energetic performances and introspective mixes. L/R is regularly booked coast to coast and internationally to move dance floors - including sets at Glastonbury, Beyond Wonderland, Shambhala, Burning Man, Lightning In A Bottle, SXSW, WMC, and his resident CONDUIT events.