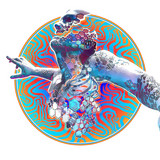 Maitreya (may-trey-ah) is a progressive-metalcore band located in Whitby, Ontario. Maitreya has been active in the Toronto metal scene since 2016.

The band released their sophomore album, Hyper Reels, June 2021. Hyper Reels is a collection of dialogues exploring parallels between human consciousness and technological advancement. The music peaks and valleys to the polarities of turbulent and serene emotions of the human psyche. Cues throughout the record reflect the integration of man and machine. Maitreya originates from Sanskrit, translating to future buddha. Through this bodhisattva character, the band anthropomorphizes metaphysical concepts, spirituality & mysticism, science fiction aspects, and entheogenic experiences present in their music.