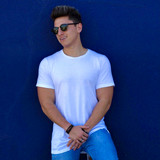 The end of 2018 marked the beginning of Centineo’s evolution - The evolution of DJ/Producer to Artist. Producer, Singer, and Songwriter - Centineo returns in 2021 as an all-encompassing artist marrying the energy and sophistication of electronic dance music production with catchy pop elements, world-class musicianship, and true storytelling.