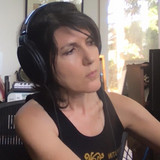 Andrea Perry is an Austin, Texas based independent songwriter, producer and arranger who plays guitar, bass, keyboards and the occasional ukulele. She first gained recognition for her fresh, distinctive sound and DIY approach to recording. She has put out 4 solo albums, in most cases playing all the instruments except for drums, and has contributed songs to many other albums. In addition she has racked up over 1000 credits for TV, film, games and advertising. Many of these credits come as one half of the duo Kaliyo with singer/songwriter Sarah Sharp. Perry is also a member of the quartet Pop 4. In 2016 she began using a diversity of singers to sing her songs in order to expand the range of her writing beyond the limits of her own voice. Raised in a thoroughly music-centric household (her father is a concert pianist and her mother a pianist and composer) Perry soaked up the sounds around her in service to her own pop sensibilities. She began writing songs in her teens. Though not classically trained herself, some of her arrangements betray a hint of the classical influence picked up through household exposure. Her other main influences begin with The Beatles and branch out to the Top 40 of the late 70s and early 80s, the classic rock of the 60s and 70s, the punk and new wave of the late 70s and early 80s, the grunge of the 90s and the indie pop, rock and folk of the aughts. Her own music is diverse but leans most often toward indie pop and indie folk pop.