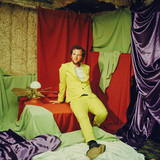 Baio is the solo performance alias (and familiar nickname) of synth pop crafter Chris Baio, who is best known for playing bass guitar in the chart-topping indie rock band Vampire Weekend. Showing an interest in music from an early age, the New York native started buying records and attending concerts before the age of ten. Later, while attending Columbia University, Baio worked his way up to music director at nearby college radio station WBAR and, in 2006, formed Vampire Weekend with Ezra Koenig, Rostam Batmanglij, and Chris Tomson, who were all finishing their studies at Columbia. Taking their name from a movie Koenig made during his freshman year, the band started out by playing gigs at the university's literary societies and at parties. Word spread about Vampire Weekend's unique Afro-pop-infused, literate indie rock sound and lyrics ("Oxford Comma," one of the band's earliest songs, referred to comma use in a list of three items), buoyed by the band's self-released EPs, which they recorded in locations spanning from their Columbia dorm rooms to a family barn. The buzz reached a peak in 2007, and the band signed with XL Records that fall. Their debut EP for the label, Mansard Roof, was followed by their self-titled first full-length in early 2008. Debuting within the Top 20 of both the American and U.K. album charts, the eponymous record proved to be one of the year's most popular indie releases. The group celebrated Vampire Weekend's success by hitting the road for the better part of two years and, amidst touring and bandmember side projects, found time to return to the studio for the creation of Contra, which arrived in early 2010. Late in 2011, the group returned to the studio to work on its third album with Ariel Rechtshaid in his home studio; Modern Vampires of the City was released in May 2013. Baio relocated to London, England a month later and began crystallizing ideas he'd had for a solo project. His debut under the name Baio, a grooving electropop confection titled The Names, was released by Glassnote in September 2015. The project's second album was inspired in large part by the U.K. Brexit and U.S. presidential elections of 2016, combined with his frequent international travel at the time (he returned home to London after a U.S. tour on the day of the U.S. election). The anxiety-fueled Man of the World arrived in June 2017, also on Glassnote. ~ Marcy Donelson & Heather Phares, Rovi