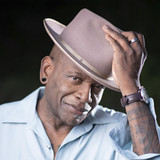 At some point you’ve heard Arnold’s rich distinctive vocals that have captured the hearts and ears of many well-respected musicians and fans alike. Long time featured vocalist with James Taylor, Lyle Lovett, and of course Phil Collins.

He has had a rather successful acting career as well, with a number of film and TV appearances. Arnold set out to further solidify his identity with a number of solo recordings. The first being “A Part of Me That’s You”, with David Benoit. “You Can’t Go Back”, with Bill Cantos, and Greg Poree.