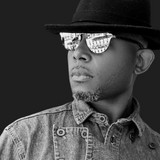 To local audiences, Damien Lamar is known for his passionate live performances, honest yet sensitive lyrics. He incorporates diverse influences in his performances to include jazz, gospel, down-tempo, R&B, rock, and ambient sounds. In 1995, Damien Lamar founded his own publishing organization, Motipur Music Publishing, a writer and publisher member of ASCAP which is now administered by his company, ProfessorClock Media LLC. Damien Lamar was performing intermittently as the frontman for The Groove Coalition with his friend and bandleader Tommy Bridgewater. Currently, he can be found performing live with Northeast Florida's Top Variety Band, KTG Entertainment as well as his newest band, Neon Motherboard where Damien Lamar along with Paul Jonathan Holmes, Andre Martins, and Ryan Sinclair recorded an assortment of live cuts at Endangered Wise Men Recording Studios in Jacksonville, Florida. The group had planned to release a new studio album in early 2020, but plans were put on halt due to social distancing constraints which led to Damien Lamar releasing new works. Over the last two decades, he has produced several singles and full-length albums which are available via online streaming services.