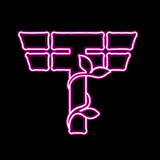 A genre bending, never ending, furious and joyous force. On the road most of the time, defined by movement, groove and the search for adventure, Tankus the Henge have been making and breaking their own rules for a while now. Originally based around the songwriting of singer/pianist Jaz Delorean and inspired by the hard graft ethics of an early 20th Century travelling show, Tankus the Henge will often play upwards of one hundred gigs a year in Europe. They have performed on stages across the world, from New Orleans to Albania, most places in between, including Glastonbury Festival, Montreux Jazz Festival, WOMAD, and countless others. The new album "Luna Park!" is released on 4th December 2020. The first singles, Fayaway & god, oil, money came out in Autumn 2020