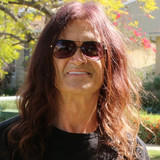 A skilled, well-traveled, and prolific English vocalist, bassist and songwriter best known for stints with Trapeze, Hughes/Thrall and Deep Purple, Glenn Hughes is often referred to as "The Voice of Rock." Starting out as the bassist and lead vocalist for English funk rockers Trapeze (which evolved from British soulsters, Finders Keepers) in 1969, Hughes earned his reputation as the bass player for Deep Purple from 1974 until that iteration of the group split in 1976. He went on to forge a successful and long-running solo career, releasing over a dozen albums, and in 2010 he began fronting the hard rock supergroup Black Country Communion, and later the like-minded California Breed. In 2016 he was inducted into the Rock & Roll Hall of Fame alongside his Deep Purple bandmates, and in 2019 he joined Aussie-American hard rock supergroup, The Dead Daisies.